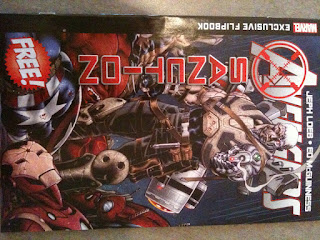 We're definitely witnessing a calm before the storm with only 8 new comic books featuring a Spider-Man appearance or cameo this week, and they come in all shapes and sizes with a magazine, a variant, and a freebie comic in the mix as well.

The storm I'm speaking about will hit in two weeks on November 16 when Avenging Spider-Man #1 is released.  It'll have no less than 6 variants, and it's been announced that all variants will be distributed in a polybag that contains a code to redeem a free online version of the issue (the issue you are holding in your hand...hmm).  Therefore, hardcore completists will likely want two of each variant -- one to open and one to remain in its original sealed state.

UPDATE:  Now unless I'm losing my mind, Comiclist.com originally listed Avenging Spider-Man #1 coming out on November 16th, but their newly updated list has it coming out next week. Let the variant onslaught commence.

Another storm will follow in December as this week's freebie comic foretells the release of Avengers X-Sanction #1 which follows the Amazing Spider-Man #666 model of offering retailers a stores-specific variant based on order size.  It's a bit too early to know how many retailers will take Marvel up on the offer, but hopefully not the 140 or so that ordered the Spidey book.

The Simpson's Classics Magazine features a cameo of next month's cover which has a Spidey spoof in the background.  So #31 will also show up on the list next month.


So it's a light hit to the wallet at your local comic shop.

And a quick note for fellow Austinites...the Wizard World Austin convention sets up shop next week (November 11-13) at the beautiful Austin Convention Center.  There will be a huge number of celebrities, and it looks like a larger group of comic dealers too for all of us boxdivers.
Posted by Andrew Hamlin at 9:46 AM